Under the original iteration of the JSS, the government committed to contributing up to a third of wages (subject to a cap of £697.72 per month) for employees of eligible employers working at least a third of their normal working hours. Employers claiming under the scheme are also required to contribute a third of the cost of the hours not worked, with the effect being that employers are responsible for at least 55% of their employee’s wages (e.g at least 33% for hours worked and a further 22% for the non-worked hours).

Many employers have criticised the scheme as not providing sufficient support for industries such as travel and hospitality, who have faced sharp decreases in demand and, in the case of hospitality, restricted trading hours.

On Friday it was announced that the JSS scheme would be extended so that employees of UK businesses who are required to shut as a result of national or local restrictions will have two-thirds of their wages paid for by the government.

Grants will be made available of up to £2,100 per employee per month to UK based employers who have been PAYE registered on or before 23 September 2020. No employer contribution to wages will be required, though they will still need to cover employer national insurance and pension contributions. To be eligible, the business must have had to close due to coronavirus restrictions and the employee must have been off work for a minimum of 7 consecutive days.

As with the original JSS, employees cannot be made redundant or put on notice of redundancy during the period in which the employer is claiming a grant under the scheme.

The Chancellor has described the expansion of the JSS as giving a “safety net” to those who will be required to temporarily close, giving them “the right support at the right time”.

The extension will run for 6 months from 1 November with a review of the scheme to take place in January 2021.

Whilst this action will entail a further, and significant, cost to the taxpayer, it will no doubt be welcomed as a lifeline by many employers who are facing enforced closures as a result of attempts to halt rapidly increasing coronavirus cases in areas such as the North and Midlands.

The government has published a factsheet on the extension but the full details are expected to be set out in a Treasury Direction, along with the main JSS scheme. 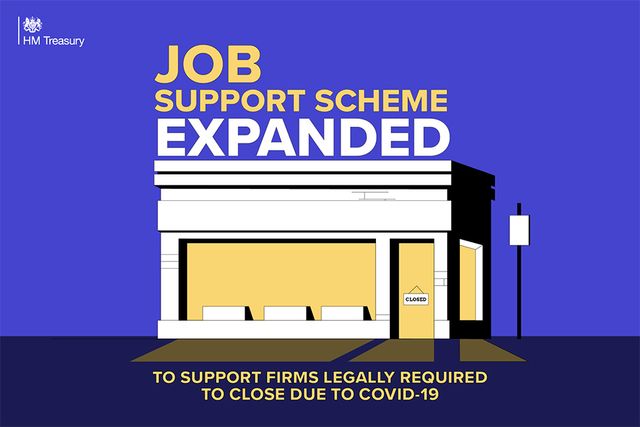